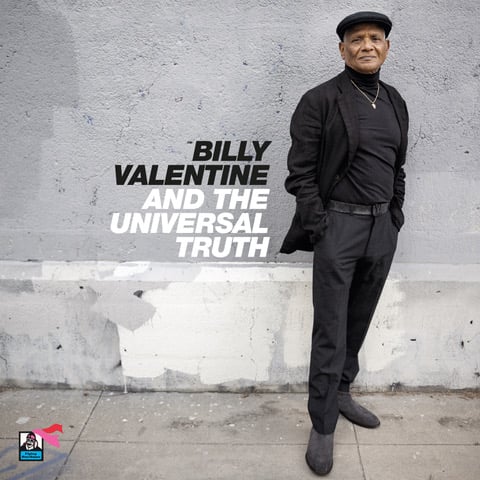 Since last September when we announced our collaboration with Billy Valentine, Bob Thiele Jr and the Flying Dutchman label, with Billy’s peerless cover of Curtis Mayfield’s ‘We The People Who Are Darker Than Blue’, we have been looking forward to the moment when we could share more music with you. Earlier this month we shared Billy’s take on Gil Scott-Heron’s ‘Home Is Where The Hatred Is’ and it followed its predecessor onto Jazz FM’s A list. Today we can share with you the news that the album ‘Billy Valentine & The Universal Truth’ is out on March 24th. It’s one you don’t want to miss.

The album sees Billy and a stellar cast of musicians including Larry Golding, Jeff Parker, Pino Paladino, James Gadson, Linda May Oh, Alex Acuña, Amber Navram from Moonchild and Blue Note recording artist Joel Ross and Immanuel Wilkins re-cast a series of important songs from the African American songbook in a unique and inimitable style, profoundly influenced by the events that were going on around them throughout 2020 to 2022 when the album was recorded at the historic EastWest Studios in LA. The works of Mayfield and Scott-Heron are joined by those of Pharaoh Sanders, Prince, Stevie Wonder, War and Eddie Kendricks. It is a sonically stunning and emotionally moving record.

‘Many of the initial releases on Flying Dutchman were by important Black voices, both musical and political…. Cut to the summer months of 2020. America, in the throes of a global pandemic, was experiencing one more come-to-Jesus moment in our violent history: the murder of George Floyd. On the heels of a powerful new movement revolving around the hash-tag #BlackLivesMatter, it seemed the right time to resurrect Flying Dutchman and seed it with this collection of eight recordings by Billy Valentine and The Universal Truth.’
- Bob Thiele Jr. (Producer, Flying Dutchman)

’Since the moment we heard the first two track Ed and I were determined that we would release this album. It’s soul music performed at the very highest level, and we are convinced that it is one of the best records we have ever released.’
- Dean Rudland (Acid Jazz)

The vinyl comes in a beautiful gatefold sleeve that mimics the classic design of Flying Dutchman album releases, right down to the design of the spine and the producer’s box. With an atmospheric cover shot taken by LA based photographer and skate boarder Atiba Jefferson, and inner sleeve shots revealing the workings of the sessions. The soft-pack CD mirrors this look. Pre-order yours now!