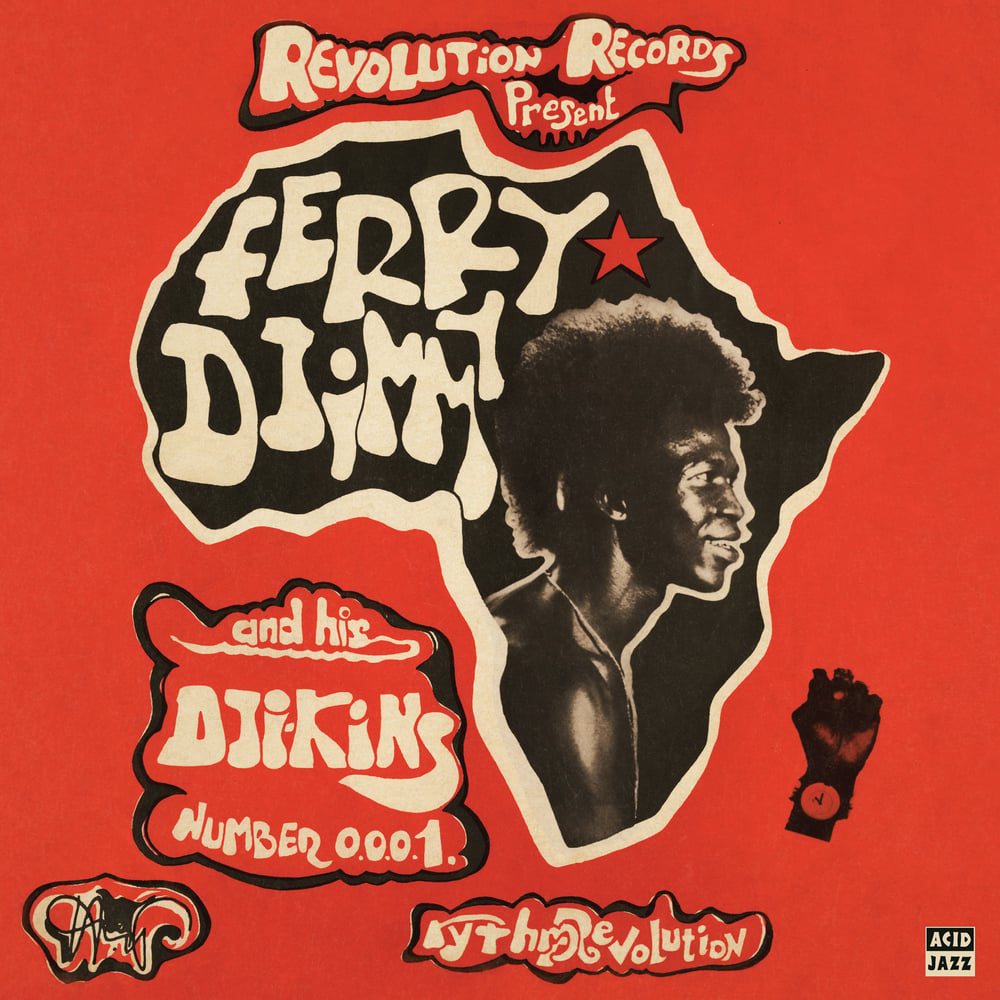 The album was originally recorded in the mid-1970s in support of Benin's revolutionary leader Mathieu Kérékou. Rumour has it that less than two hundred copies survived a late-'70s fire.

Ferry Djimmy's life story is one of the most extraordinary you're ever likely to hear. Born in 1939, Jean Maurille Ogoudjobi (the nickname Ferry comes from 'ferry djimmy' being short for 'please forgive me' in Yoruba as he was a very smart but unruly kid), Ferry had 43 siblings. By the late 1950s, he started a career as a schoolteacher. As a tall and imposing young man, Ferry also started a parallel career as a boxer. When he wasn't teaching or fighting, he also caught up with the emerging night scene in the city of Cotonou, where local folklore, Congolese rumba, highlife and Cuban adaptations were favoured by local audiences as well as some blues, jazz and rhythm'n'blues.

By the late 1960s, Ferry had relocated to Paris where he became a policeman, often asked to assist Jacques Chirac on various missions before the future President of France became mayor of Paris in 1977. It was here in the early '70s he recorded his first two singles, 'A Were Were We Coco' and 'Aluma Loranmi Nichai'. These songs met little interest and by 1974 Ferry was back in Cotonou.

His return to Benin coincided with 1972s revolution's journey toward Marxist-Leninism. The country's leader Mathieu Kerekou was impressed by Ferry's charisma and striking look and became fast friends with him. He saw in him a personality that could seduce the younger generation in a funkier way than straight Socialist speeches. He allowed Ferry a certain budget to start his own record company called Revolution Records.
Inspired by Afrobeat, Nigeria's Fela Kuti and his musical journey over the past decade, Ferry recorded Rhythm Revolution in Cotonou at the Satel studio. Wanting his musical vision to stay as intact and raw as possible, Ferry played most of the instruments himself – guitar, saxophone, drums/percussion and keyboards.

The resulting album is one of the toughest and deepest slices of African funk ever cut, combining raw African rhythms with distortion, energy and wit. In spite of obvious nods to James Brown, Fela Kuti, George Clinton and Jimi Hendrix, Ferry managed to create something very unique. Eight slices of raw garage-funk from Benin as evidenced by the raw 'Carry Me Black', a definitive ode to blackness sung in the West African language Yoruba. A dozen years past Benin's independence from France, 'Be Free' tells the never-ending story about a country's disillusions and the importance of keeping some African roots, no matter how westernized it could be.

The album's sleeve, designed by Ferry's friend and local artist Gratien Zossou, perfectly captures the time and the African revolutionary struggle. It stands as one of the fiercest African LP covers ever designed, inspired by the ANC's struggle in South Africa as well as the Black Panthers movement in the US.

Ahead of his time with an original artistic vision, fifty years after his heyday, very few Beninese remember Ferry Djimmy's name. Mathieu Kerekou ordered his ministers and administration to buy this album when it came out. Very few did so. The proceeds were supposed to fund the association for Benin's paralytics and crippled persons. It was a total failure, nobody bought the album in spite of being played a few times on Benin national radio.

Way too wild, too far out, Rhythm Revolution couldn't sustain the Ehouzou (Revolution) ideology and Kerekou lost interest in Ferry as his plan to speak to the youth didn't work out. By 1977, on the advice of Fela Kuti, Ferry had relocated to neighbouring Lagos with his family. He often visited his friends Fela, Orlando Julius and Geraldo Pino and hung around with Juju music master King Sunny Ade. In early 1980, he got to meet up with his long-time idol, Mohammed Ali, who was on an official visit to Lagos in order to convince Nigeria to boycott the 1980's Moscow Olympics.
Keeping his artistic vision intact, Ferry continued touring and recording music with his family band, the Sunshine Sisters, but these songs were never released. A heavy smoker, Ferry died of a heart failure on 29th May 1996 in Lagos.